AI as the Artist’s Muse 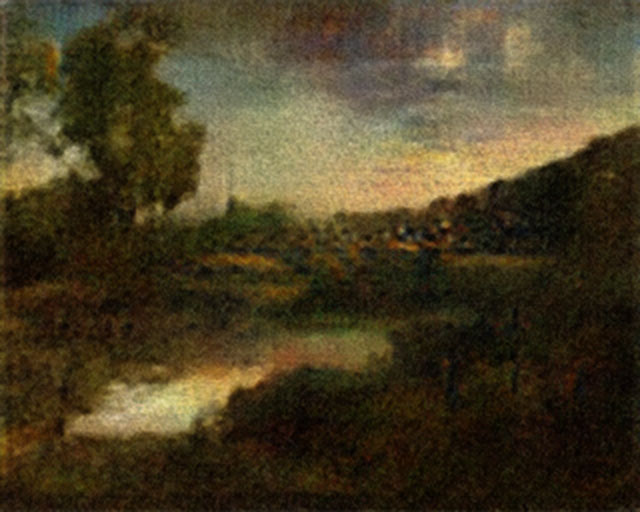 What happens when a classically trained painter and an A.I. muse come together to create a work of art? Chris Peters, a Los Angeles-based artist, filmmaker, and former software engineer, began to find out with his latest project, “Tensor Dream.” Chris set about customizing a Deep Convolutional Generative Adversarial Network (DCGAN) which is a type of A.I algorithm capable of self-learning. The process of creating these works poses questions about the human/machine relationship and what could be considered dream or reality.

From his introduction to the project, “Over a three-day period, the neural network studied the composition and palette of thousands of landscape paintings before finally achieving an understanding of their gestalt. Now, in seconds, the A.I. can synthesize and propose new compositions. These landscapes have an odd, alien quality but are still remarkable given that the software began tabula rasa, an algorithm filled with nothing but the ability to self-learn. The entirety of its knowledge came from the set of digital images presented to it – a collection of paintings curated by Peters.”

I became aware of Chris almost 20 years ago when we exhibited together at the infamous monthly art event in Los Angeles called Cannibal Flower. Over the years with his gallery shows, he has been regarded as a Pop Surrealist, rendering oil paintings of skeletons in various situations. As a painter myself, I wanted to find out more on how this series came about.

Arabella Proffer: You had a gallery unveiling this year of your A.I. paintings in Santa Barbara and you gave a talk and with a demo about the project in London. How did you decide to move this direction after being known for the finely rendered surrealist paintings that you were exhibiting?

Chris Peters: It was very difficult, I love painting skeletons, but the area of A.I. + Art is so new I just felt compelled to try.

AP: What was the hardest part of the process?

CP: Writing the Python code and the waiting.  I have a technical background, but finding the open source code, making the necessary changes, and then getting it all to work was a challenge.  Also, the A.I. models take days and days to run, even on the fastest machines, so understanding the effect of a change required a lot of patience and a lot of electricity!

AP: American Tonalism is a genre of art that is very tied to transcendentalist sensibilities, why did you decide to feed images of this art movement in particular?

CP: American Tonalism really touches of core part of me, probably the closest genre to describing me as a person.  That’s what I wanted the machine to see and achieve some kind of understanding of.

AP: Did you find that A.I. favored certain colors once you began to lay out your palette?

AP: You mention that as you were in the process of painting you began to understand the logic of these compositions, what were some examples of that?

CP: The A.I. is always trying to make sense, but often failing, that’s part of the fun. Many times, after working on a painting for a few days, I would see parts that made no sense at first, but then I could later see it was a failed attempt and say putting one tree in front of another.

AP: Some might ask in general, why? Why paint a copy of a copy to then make yet another copy?

CP: I think we live in a simulation. I want people to see these paintings and think that over.  What is real, what does reality mean?  From an art theory view this is very much a conceptual art project.

AP: There’s an argument that A.I. paintings just repeat generic patterns and ideas; no risk is being taken, that a machine can’t make choices based on experience the way a human can. Do you think that is true, or will that begin to change over time?

CP:  I reject the whole idea. So much of creativity is putting things that exist together in new surprising ways. The A.I. is VERY good at doing this.

AP: Can you talk a little bit about your latest project, Vertigo A.I.?

CP: Sure, I wanted to extend this idea to experimental film. I had an A.I. watch the Hitchcock classic over a period of several days and then recorded the neural network as it changed under the influence. I had a different A.I. do a bizarre narration to this footage. Together it made for a pretty disturbing combo!  It will have its premiere at the Slamdance DIG Showcase in a few weeks.

Arabella Proffer is the Operations Manager at Pandata, as well as a surrealist painter who participates in solo and group exhibitions throughout North America, Europe, the Middle East, and Australia.